the 3 essentials for a trip to Ethiopia

Read the article&nbsp ↓
When we evoke a tourist stay, the word "unavoidable" is generally reserved to evoke the characteristic sites of the visited country. In this article, the term "unavoidable" is used to describe 3 features of Ethiopian culture that the traveller feels in an obvious way when in contact with the Ethiopian population. 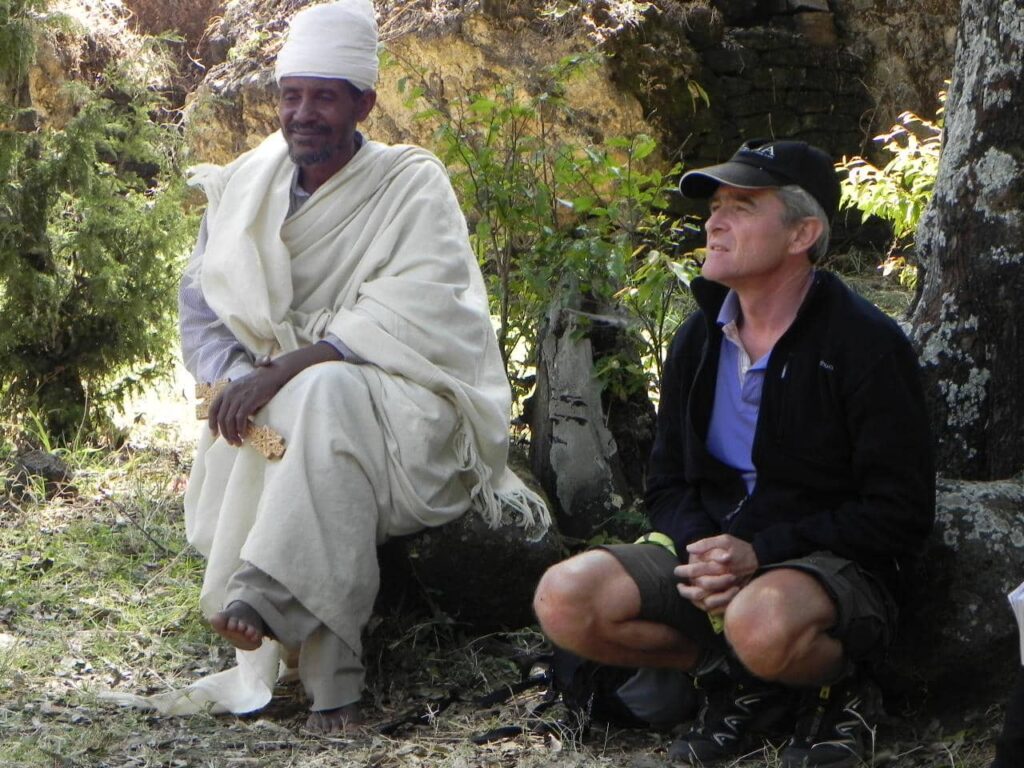 Journey to meet the inhabitants of Ethiopia: the 3 qualities that make us admire them and become attached to them.

One of the causes of this fervour is undoubtedly the ancient roots of the Ethiopian Christian Church, which is the religion with the largest number of followers. Indeed, these go back to the beginning of the 4th century.

Places of worship are numerous. The faithful crowd into the churches and pray outside when there is no room left inside.

Believer or non-believer, the traveller is captivated and impressed by the moments of collective jubilation he can experience at the celebration of feasts such as MESKEL (end of September), LEDDET equivalent of CHRISTMAS (very early January) or TIMKAT equivalent of Epiphany (3th week of January).

The participation of all is facilitated by the fact that songs, music and dances play an important role in the celebration of Ethiopian religious festivals.

The unavoidable monolithic churches of LALIBELA are one of the symbols of the spiritual dimension of the country.

Not forgetting the churches dug out of the rock of the Tigray cliffs... To reach them, you sometimes have to climb the rock faces and not be prone to vertigo!

But beyond this symbol, and even if in the cities the religious practice of young people seems to be declining, it is no less true that everywhere and for all generations, the spiritual dimension of existence remains a sincerely shared value in Ethiopia.

Music and dance are omnipresent in Ethiopia where 84 ethnic groups live, and therefore where at least 84 dances exist that have emotion and dynamism as a common characteristic.

The ESKESTA is the best known: dancers move their shoulders in a jerky movement from left to right, placing their hands on their hips. The famous Ethiopian dancer and choreographer MELAKU BELAY is one of the artists who has contributed the most to the knowledge of this dance in the world. He is now the owner of a traditional nightclub in Addis (Azemati bét) where people sing, dance and drink tej (alcohol made from honey). His establishment, the FENDIKA, is a mythical place of the Ethiopian nights. I have spent memorable evenings in this Addisian landmark, where skin color, age and gender are not an issue!

To find out more about its much broader vocation, you can consult numerous articles, including this one from Liberation.

If I have mentioned MELAKU BELAY in this article, it is not only because he is a world-famous Ethiopian artist and an "ambassador" of ESKESTA, it is also because, having started his life on the streets and without family, he is a known example of the courage shown by many anonymous Ethiopians, today as in the past.

Everywhere on the roads, in towns and villages, the inhabitants send us back their welcoming and benevolent smiles.

Unquestionably Ethiopians are courageous, or resilient to use a buzzword.

They overcame past hurts and defeated those who sought to dominate them, whether they were external aggressors or internal enemies within the country.

Ethiopia is the only country on the African continent that has not been colonized, as the period of occupation by the Italians from 1935 to 1941 cannot be equated with colonization.

The Ethiopians managed to free themselves from the yoke of the bloody military dictatorship that the country experienced from 1975 to 1991.

Ethiopian peasants have literally shaped the landscape of many regions, particularly through the creation of terraced crops.

In the countryside or on the outskirts of cities, the constant movement of women and men along the roads, often on foot, and sometimes heavily laden, commands respect.

For the traveller who travels by car or on foot, the unmissable encounter with children and young people of all ages, who come or go to school in groups, on foot, with their notebooks under their arms, in their school clothes, is a testament to their thirst for learning.

It is no coincidence that the Ethiopians have many champions in the demanding disciplines of fundraising and marathon running. I have excellent memories of my meeting with champion Haile Gebreselassie, a model of kindness and simplicity, despite his incomparable sporting record and his exemplary success as an entrepreneur.

These 3 essential values of the Ethiopian population explain why Ethiopia is one of those countries where I always have so much pleasure during my numerous stays!

If you wish to come and meet the people of Ethiopia and discover by yourself their values and their friendliness during a trip, I invite you to contact me or to take a tour on the proposed tours in Ethiopia !

PrevPreviousDiscovering the animals of Djibouti
NextDjibouti or the geologists' paradise: 5 sites not to be missedSuivant